Once upon a time, I was a child star – just like every other 8 year old in the greater LA area. Unlike these other “child stars” I was making it big – I mean I was an extra for an OPRAH movie AND a trading spaces episode, although my bedroom did not get a makeover. I had $300 in my pocket, making me the richest 6th grader by a long shot. Never mind the fact that I didn’t have a lot of friends, and and that I read a lot of books – Oprah’s crew thought i was pretty sweet.

I had an audition for Totino’s Pizza Rolls when they were first promoting them. Don’t believe the kids in the commercials, those things are FOUL. Not only are they filled with mystery meat (pepperoni?) but during the audition they served them cold. Not lukewarm, not room temperature, but COLD as in barely defrosted, just out of the freezer cold. Considering how much I love to eat, this wasn’t an enjoyable experience.

My personal favorite is the Febreeze audition circa 2004ish (spoiler alert: I got a Call back for this one!). If you’ve ever purchased Febreeze you know that it doesn’t smell quite like “Misty Meadows” or “Delightful Daisies”. The wonderful people in charge of casting this excellent commercial had me do a push up, pause, sniff the ground and then look back at the camera pretending that the floor smelt like roses and butterflies and beautiful things (you’ve all seen this commercial or some variation of it). I’m almost positive that the floor hadn’t been cleaned in months and I think I inhaled some serious dust bunnies. Side note: I haven’t purchased Febreeze since. No thank you, I’ll just vacuum.

My parents have been cleaning out different rooms in the house now that my brother moved out (cheers!) and have been finding all sorts of treasures. Much to my surprise my dad found quite a few copies of my head shots. Correction: He found a pretty large STACK of them. Due to the fact that I was really trying to make it big, I have multiple photos, each with a different expression (sorry for the poor quality – I had trouble with the scanner). 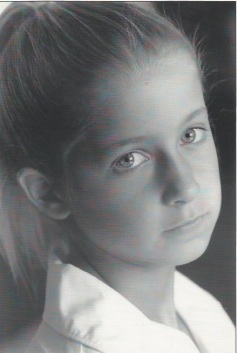 I needed two pictures for this one, Clearly

Have any great, awkward, hilarious or just plain embarrassing audition stories? Share them in the comments!

SNEEK PEAK AT MY LIFE